The Eastern Bluebird is a small thrush. Smaller than the Robin with fairly long wings and short legs. Their bills are short and straight. The blue color is what makes them catch the eye, but they are fast and blend well with brush and foliage because of their brownish underneath feathers. The male birds of course, are a deeper blue, and the female birds have the deep blue just on their wing tips.

Located in the Eastern half of the United States, I bet I’ve only seen a Bluebird about 5 times. And each of those times have been on bike rides in the country. This makes sense because Blue Birds live in open country, scanning the ground for prey. They feed by dropping to the ground onto insects or, in fall and winter, by perching on fruiting trees to eat berries. Bluebirds commonly use nest boxes as well as old woodpecker holes to make their homes.

If you think you have a chance to attract bluebirds to your yard, you can always build a nest box. Make sure you are building the next box with specifications for bluebirds with the proper size hole and a top with a hinge in case you need to open the box. There are different schools of thought about cleaning the box. The other caution is to also make sure that nest box is safe from predators.

The males are much brighter than the gray-brown, blue-tinged females. This small little bird finds its nests in holes in trees or nest boxes and often gathers in small flocks outside of the breeding season to feed on insects or berries. They have a quiet, chortling call. You can help out Western Bluebirds by placing nest boxes in your yard or a nearby park with the same instructions as with the Eastern Bluebird.

Bluebirds also like the edges of the woods. They are quick and quiet for the most part, and for lack of a better word, often elusive. A Western Bluebird only weighs about one ounce so they are small and fast.

Bluebirds have interesting family relationships. There are times when the Western Bluebirds have helpers at the nest. Most of the extra birds attending nests are helping their parents, probably after their own nests have failed. However, studies show that many nests include young that were not fathered by the resident male.

I like bluebirds because of their color, but as I’ve studied the family of bluebirds, they have shown in many ways they are socially advanced by the way they take care of each other and their neighbors and relatives.

Once again, we find the bills (beaks) of the birds decide how and where the birds live. Because they are unable to dig their own holes for homes, they must rely on others to do that for them, such as the woodpecker.  This makes dead or older trees extremely important for their survival.

My quest this spring is to look for bluebirds. I have an idea where to look in my area. I plan to take my camera, birding journal and set out to document my findings. If you find bluebirds on your walks or in your yards, please leave a comment and tell us where you have found those elusive little birds. 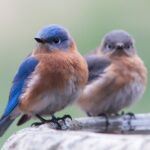