How DO Birds Get Water in the Winter?

The Eastern Bluebird, like its fellow member of the thrush family, the American Robin, is often viewed as a harbinger of spring. The Iroquois believed that the Bluebird would scare off Sawiskera or Flint, the spirit of winter (en.wikipedia.org/wiki/Bluebird). However, either bird may be seen in winter in more southern parts of its nesting range. The Eastern Bluebird is the state bird of Missouri and New York, and, if the Mountain Bluebird is included, then also Nevada claims the bluebird.

The birds have had varied fortunes as favored birds to humans who are their sometimes protectors, sometimes destroyers. Farming activities produced the open woodlands that they preferred, but humans brought in House Sparrows and Starlings, two severe competitors. In more recent years nest boxes provide a safe place for their brood, if the opening is too small for starlings to enter, thus augmenting the natural cavities in dead wood that they naturally prefer. The nest boxes still need to be watched to drive off sparrow invaders.

In addition to the beautiful blue back, wings, and tail, they have orange neck and sides, and a white belly. The song is a whistled chiti WEEW wewidoo and the call a musical jeew. Good references include National Audubon Society Field Guide to North American Birds (Alfred A. Knopf, Inc., New York, 1998) and National Audubon Society: The Sibley Guide to Birds (Alfred A. Knopf, Inc., New York, 2000).

Growing up in rural Illinois, the belief was that the Eastern Bluebird had all but disappeared in the 1960s. Occasionally, the Indigo Bunting, an iridescent blue, was called a “bluebird,” and buntings were fairly common in the area. Finally, the true bluebirds appeared again in the 1980s, including on our farm. We put out a nest box on a pole about six feet tall, and I recall interest for a time by the desired birds. But unfortunately, the dominant House Sparrows took over the box.

The scientific name of the Eastern Bluebird is Sialia sialis and it belongs to the thrush family. The speckle-breasted juveniles give their thrush affinities away. There is also a Western Bluebird in the far west, mostly not overlapping the Eastern Bluebird.  And, still again, a Mountain Bluebird, occupying a large area in between, particularly in the Rocky Mountains. They all look similar, about seven inches long, 13 or 14 inches for wingspan, and weighing about an ounce. They all feed mostly on insects.

An interesting feature of bird plumage coloration is that blue-colored hues, (measured by wavelength in nanometers) are not produced by pigments but are caused by physical features due to the structure of feather barbs at a microscopic level. Ultraviolet light can be reflected from surfaces that humans see as blue. Birds have an additional cone type in their retinas that is sensitive to near UV (300-400 nanometers, whereas visible light has wavelengths less than 400 nm). The phenomenon called coherent scattering has been demonstrated in bluebird feathers. Researchers (Richard Prum, Staffan Anderrsson, and Rodolfo Torres, 2003, Coherent scattering of ultraviolet light by avian feather barbs, The Auk 120(1):163-170) attributed UV reflectance to regular arrangement of alternating layers of keratin (makes up fingernails) and air layers, causing constructive interference. This means that a wave reflected from one layer bounces back to build on another wave just reflected from another layer at a fraction of the wavelength in distance from it, like two ocean waves colliding to make a super wave. The value of this to the birds is not known for sure. To us they are simply blue. Much remains to be learned about even familiar birds. 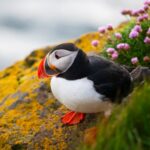